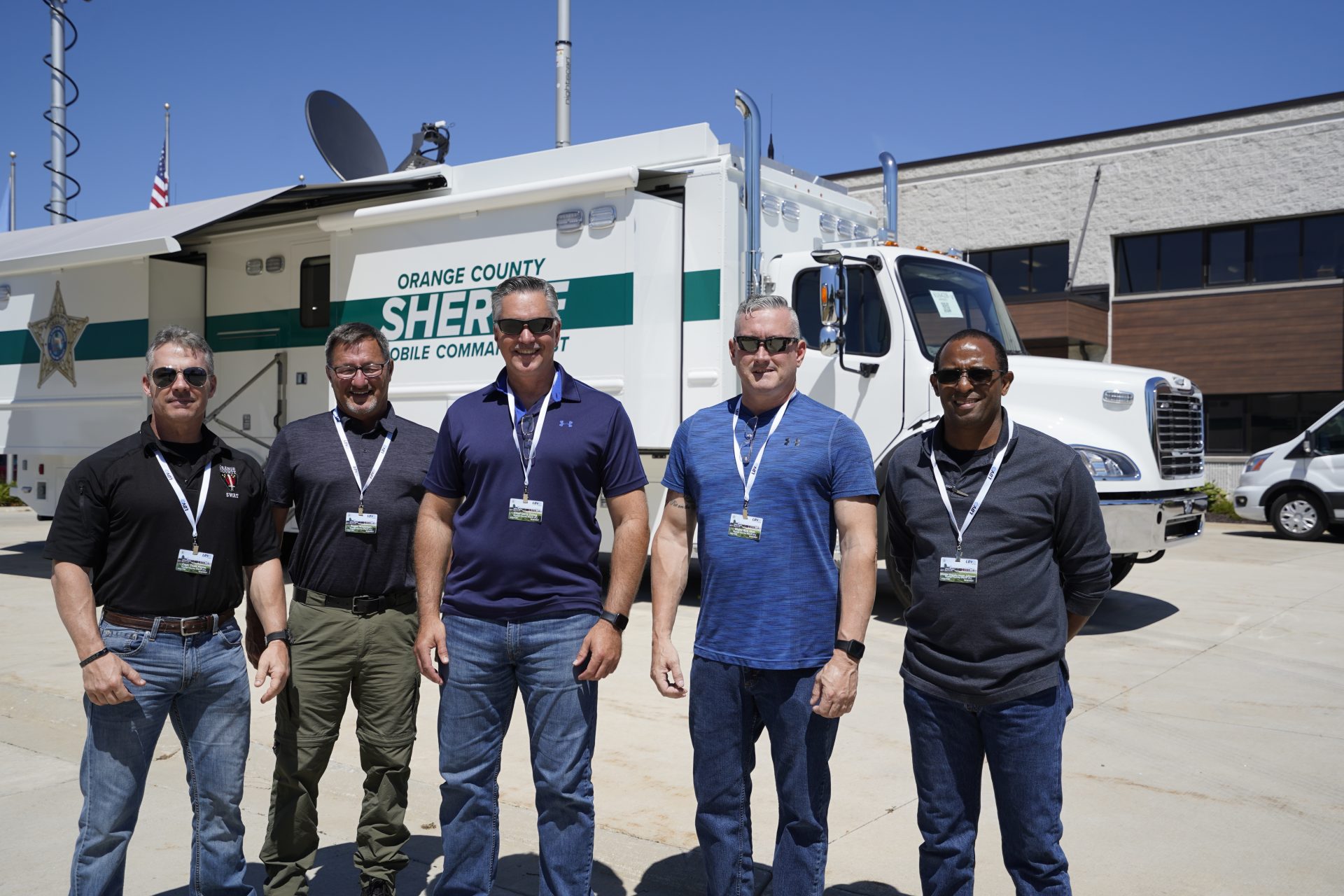 This new mobile command center built for the Orange County Sheriff in Florida. Their command center features a Freightliner M2 112 tandem axle chassis with a Detroit diesel DD13 12.8L 505HP engine and an Allison 4000EVS automatic transmission. The all aluminum body features four of LDV's exclusive flat floor slide-outs to maximize the available interior workspace. The mobile command center also has a weatherproof exterior workstation. Extreme duty body storage compartments were also integrated. Our exclusive Intel-I-Touch™ vehicle automation system was also installed to speed up the set-up and shut down of the vehicle on scene. There are touch screens in both the cab area and at the curbside entry door for easy access. The cab has a custom fabricated center console that houses one of the touch panels as well as communications radios and the emergency lighting and siren controller.

Inside, Orange County's mobile command center features a front work room complete with six (6) workstations with curved monitors and spider base task chairs. Solid surface counter tops are utilized throughout. There is a stowable center conference table with both short and tall leg options. Overhead aluminum cabinets feature dry erase writing surface and LED under cabinet lighting. Magnetic closure pocket doors (2) are also included in the command vehicle. The center of the truck has an electronics rack and a multi-function printer/copier on a pull-out tray. There is also a galley with microwave and refrigerator.

The rear conference room inside the command center features a center table with seating for eight (8). A corner workstation is also included along with flip down bench seats. A 65" Mondopad is installed on the rear wall. Magnetic dry erase white boards have also been installed.

VIEW ALL TESTIMONIALS
"We are extremely happy with both of our LDV-built trucks. We have already recommended other Departments check-out LDV for their custom vehicle needs."
Deputy Chief Marty Bender
Fort Wayne Police Department
The mission of the State Police is to respond to incidents statewide and to assist our federal and local law enforcement partners with their investigations. The new mobile crime laboratory will help ensure …
Colonel O'Donnell
Rhode Island State Police
"I was very satisfied with the whole experience and process. I believe that the sales personnel and technicians are very knowledgeable and have years of institutional knowledge that shows in the execution of the unit. My questions were all ways answered immediately and if there was any reach back for additional confirmation it was always followed up with a phone call and email. The open lines of communication provided both of us the full awareness of where we were in the build process and helped eliminate unnecessary delays or unanswered questions. Everyone I encountered during my visits were always smiling and happy while working, which was great to see and experience. This is reflected in the finished product that was noticed by my staff and all others that have visited to see the new addition to our fleet."
Alex O'Rourke
Logistics Section Chief
The best feature of the vehicle is the flush floor slide-out in the front of the vehicle. It provides a very functional work area and always receives favorable comments.
Greg Logan
Chief Deputy, Woodbury County Sheriff
The Command Vehicle enhances our team policing philosophy, and enhances our ability to carry out our mission of 'Know us BEFORE you need us.
Chief Scott Greuel
Oshkosh Police Department
Workmanship. Attention to detail. From the design and the initial recommendations to guiding us in deciding on a floor plan and technology components to ensure we have a unit that will bring high value for us for many years to come …
Tobie Weberg
Deputy Inspector, Milwaukee County Sheriff's Office SWAT Commander
MOC 1 is working out great. No issues and we are so very pleased with it. We get lots of compliments about it when out and is truly meeting our needs.
Gerard J. Whittington, Jr.
Buffalo, NY
I wanted to drop you a note to say that we are very pleased with the product that we purchased from LDV. It is evident that your company invests in quality and the truck reflects the experience that LDV has in building. Thank you for …
Lt. Dwane Razzetti
Bergen County, NJ OEM
I just wanted to send a thank you for all the assistance you provided with the planning and purchase of our new SWAT vehicle. To say that we are impressed with it would be an understatement. It is exactly what our agency …
Sergeant John M. Dunham
Elmira, NY
Trucks for Immediate delivery

Explore our huge inventory of on-demand specialty vehicles, and find the one that's right for you.

Have a question? We've got answers.

Get the answers you need.